Bernard Thorogood was a London Missionary Society minister who served in the Cook Islands during 1950s and 60s.

His book, Not Quite Paradise, published in 1960 by London Missionary Society, UK, is an honest and often humorous look at Cook Islands life in the 1950s.
Here is one example of friction between religions.
Manihiki has a larger Roman Catholic population than most of our islands, so it is not surprising to find friction arising between the groups. Little annoyances swell into serious quarrels. Perhaps one Sunday the Catholics have finished their service while ours is still going on, so the Catholic children start playing in the street outside our church. Our deacons call this a deliberate insult (which it almost certainly is not) and plan some way of revenge. Our church supports the Boys’ Brigade; the Catholics have the Boy Scouts, so the two groups, both dedicated to good citizenship, tend to work against each other. Our side blame the others for starting all the disputes, but I have never known a matter of this kind where the fault is all on one side. A lot depends on the good sense of our pastors and the Catholic priests. Occasionally some outside activity is big enough to draw both sides together.
We have a couple of copies at the library. 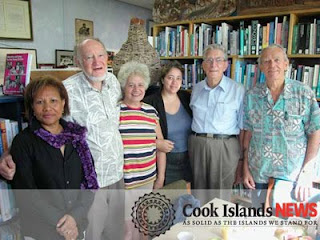