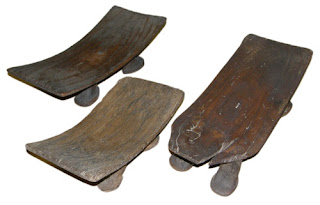 This picture shows three urunga in the CILAMS museum collection.
Urunga are headrests but in a number of museums in the world they are often mistakenly referred to as seats (no’o’anga or atamira). In fact these three exhibits were once labelled as ‘thrones’.However two carvers on Rarotonga, Henry Tavioni and Gavin Aratangi have both recently confirmed that these items are urunga.
Seats for chiefs were larger and taller although similarly carved. In the past, commoners sat on the ground or floor. Urunga are carved from a single piece of wood, usually tamanu (island mahogany). One of the three in our collection is from Atiu, one is from Mitiaro and the other is of uncertain provenance.They are between 44cm and 50cm long, 18cm to 24cm wide, and 7.5cm to 9.5cm high at the lowest point.
Before European beds and feather or kapok-stuffed pillows were introduced, Maori people slept on mats on the floor so it makes sense that urunga, given their size and height, would have been used to support the head.
Anything higher than 9.5cm is probably a seat. 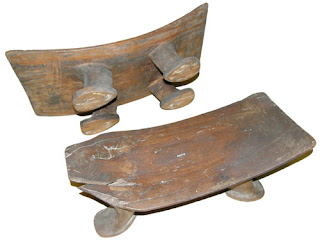 A typical headrest has 4 tear-drop shaped feet and the ends of the ‘seat’ are curved upwards.
Maori traditionally considered the head (upoko) a sacred part of the body, so it is unlikely anything used for resting the head on would be used for sitting on as well – in fact anything associated with the head is always treated with respect.For example, a hat, which is worn on the head, is never left on the floor where feet walk. Children are often spanked if they sit on pillows. Makave rouru (hair sections tied with ribbon) from a haircutting ceremony are stored away carefully for years.
The head is considered superior to other parts of the body. Upoko also means leader, ruler or head of a clan, group or tribe.
Makiuti Tongia said recently that an urunga was considered tapu and was often buried with the owner when he or she died.
When we were children, my younger brother stood and rocked on an urunga with his feet, much to our grandfather’s (Kairae Papa, born in Atiu, 1914 - died Mauke, 1991) disgust. My brother was scolded severely for putting his ‘dirty feet where one puts his head’. I also recall our grandfather telling us the item should be stored up high, not sitting on our living room floor.
Akekaro Kairae, a Maukean, remembers her grandfather, Tauraariki J Paparongo (1888-1965) always used a wooden urunga of the types pictured to support his head whenever he lay down on a mat on a concrete floor, which elderly people often did (and some still do) in an effort to ease their aching backs.Urunga were reputedly made in all the islands of the Cooks group except Mangaia. - Jean Tekura Mason, curator

The mystery of the Ranginui ‘drum’

(Click picture for a larger image)
This upright anthropomorphic drum from Mangaia in the Cook Islands is the only one of its kind in the world. It also has a unique history, having survived numerous air raids in London during World War II, where the former owner, William Oldman, and his wife Dorrie, protected their collection in the basement of their house using buckets of sand and water. The bulk of the collection was bought by the NZ government in 1948 and was divided up and shared amongst the major and regional museums of New Zealand. This piece went to the Napier Museum in Hawke’s Bay, where it resided for many years until a former president of CILAMS spotted it and asked for its return. It was eventually returned in 1988.
William Oldman saw a lot of significance in the piece – it was never offered for sale in his catalogues and was kept with his personal Easter Island, Hawaiian and Cook Islands collections. A photo of Oldman in a booklet called ‘No sort of iron’, shows this piece nearby.
The label that accompanied this artwork from New Zealand claims it is “Ranginui, master of tranquility”. However, nowhere in Mangaia’s history or mythology is such a character evident. Perhaps the carver, or Oldman himself named it, or maybe it was named by one of the many curators who have taken care of the carving over the years.
But the question always being asked about this item - is it a drum at all?
It has been labelled as such for nearly 100 years but it doesn’t have the typical features of a Cook Islands drum; for one thing it is made of coconut palm wood, which is not usually used for drums as it is not durable and doesn’t produce a good sound.
Secondly, it is too ornately carved; typical drums have designs carved sparingly on them so as not to interfere with the quality of sound. By contrast this one has carved designs on every surface, except the head. Most of the designs on the drum are the double ‘k’ design. This motif is said to represent two warrior brothers fighting back to back, who were slain around 1725. Their sacrifice contributed greatly to their father, Mautara, being installed as “Mangaia” (leader) of the whole island (Ref: MPJ Reilly, War and Succession in Mangaia, which we have in the Library). It is a motif commonly used on ceremonial adzes and it is the ‘k’ motif that helps to identify Ranginui as Mangaian. 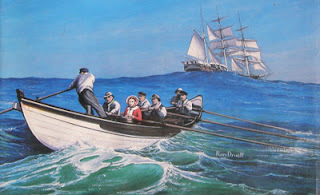 Prize-wining New Zealand author, Joan Druett discovered a grave in an unkempt cemetery at Ngatangiia on Rarotonga while resting in the shade of a tree nearby.
The inscription on the stone read:

To the Memory of Mary-Ann, the beloved Wife of
Captn A:D Sherman, of the American Whale Ship Harrison
WHO departed this life January 5: 1850 Aged 24 years

That grave is the motivation for the book ‘Petticoat Whalers: whaling wives at sea, 1820-1920’.
The book is about the experiences of the women on board the windjammer whalers and in the boisterous ports of nineteenth century New Zealand, Hawaii, Australia, Chile and Peru, as well as on a host of islands, including the Cook Islands (then known as Hervey Islands).
We learn that an extraordinary number of women accompanied their husband-skippers on these long and perilous voyages despite the many dangers and privations.
The women went for several reasons – the main one being they didn’t like to be separated from their menfolk for the four of five years each voyage typically lasted.
American Eliza Brock called at Rarotonga on the Lexington in March 1854 and reported:

‘stoped at the Missionary’s house, Rev Mr Buzzacotts [and] had a very pleasant visit stayed there two days found them to be very fine Folkes, very pious people’.
Eliza visited Mr Buzzacott’s church ‘…just finished built by the Natives a very nice one [though] not quite equal to the Churches in America’.
She also met the Queen, ‘shook hands with her. She was dressed in a white Robe, with a wide long red belt around her waist.’

Another American, Lucy Smith, who called at Aitutaki on 12th January 1876, had this to say about her visit.

“There are 1500 inhabitants on the island and at least 1000 were on the shore to see us land. They filled the road leading to Mr Royle’s (LMS minister) house and as we went up the native police took little whips and whipped each to make room for us to walk and all that could get to the edge of the road held their hands to shake hands with us sometimes three extended their hands and caught mine at the same time. There are 600 children that attend school regularly… Mr Royle has charge with 70 native teachers under him… he is also assisted by his wife and daughter Alice they gave us a very cordial welcome and we enjoyed the day very much. We visited the schoolhouse and church large buildings built of Adobe with thatched roofs the pillars and rafters all covered with cloth made from the mulberry tree and painted with black figures*. We stopped until about four and when we came away brought a number of curiosities presented by Mr Royle and family.”

(*note interesting use of tapa cloth) 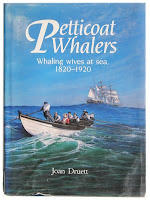 A stitch in time … 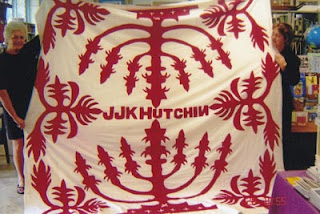 This tivaivai is quite possibly the oldest still in existence.
It was a farewell gift to the Rev JJK Hutchin on his return to New Zealand in 1912, where he reportedly died before the ship docked.
Rev Hutchin was a missionary for 30 years and was the first principal of Tereora College when it opened in 1895.
His great-grand daughter Carolyn McCracken brought the tivaivai back to Rarotonga for a short time in 2008 when this photograph was taken.
Tivaivai are appliqué and patchwork bedcovers made by women in the Cook Islands either working alone or in a group.
Some of the makers say it’s backbreaking work and certainly the finished products are not for daily use on a bed! They are treasured, and only brought out on special occasions.
In fact, the practice of using favoured tivaivai as shrouds for the deceased accounts for the scarcity of any over 60 years old.
The museum has a small collection of tivaivai and the library has several books on the subject (in the Pacific section).
We also have photographs of the Rev Hutchin and his family at the Takamoa Mission House and at the opening of Tereora College.
The history and practice of tivaivai making in the Cook Islands is fascinating. For an in-depth account CHECK THIS ARTICLE also on this blog.
No comments:
Newer Posts Older Posts Home
Subscribe to: Posts (Atom)