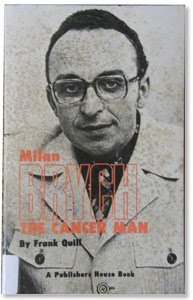 We have two copies of the book Milan Brych: the cancer man (published 1980) by Australian journalist Frank Quill (who tends to be supportive of Brych) and one CD-ROM from the anti-Brych Underground Website http://mbuw.org/ in the library; both are available for lending.
Vlastimil Milan Brych, a Czechoslovakian pharmacist, claimed to have a cure for cancer and established a clinic in Rarotonga in 1977 with the support of the Cook Islands Party (CIP) government of the time. Brych had practiced as a cancer clinician in Australia and New Zealand, before being kicked out of both countries. Here he was allowed to practice his secret immunotherapy techniques on cancer patients who travelled from all over the world to his cancer clinic in the Cook Islands.
Next to the RSA at Nikao on Rarotonga is a cemetery locals refer to as the “Brychyard”, where his unsuccessful patients ended up.
After leaving the Cook Islands he moved to Los Angeles in the USA but in 1980 he was convicted of practicing medicine without a licence and jailed. He served three years of a 6-year sentence and was then deported to Switzerland.
Brych may have many detractors still but he also has many supporters, particularly in the patients who believe he cured them. 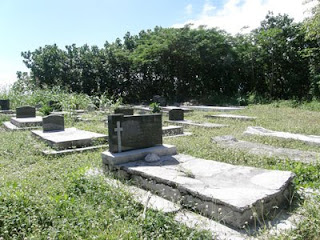 The "Brych Yard" at Nikao, Rarotonga