In the wake of Kon Tiki

The story of the French navigator and explorer, Eric de Bisschop, as told by himself in his autobiography Tahiti Nui: by raft from Tahiti to Chile (published in 1958) and the completion of the tale of his life (including his tragic death on the reef at Rakahanga in the Cook Islands in November, 1958) is told by Bengt Danielsson in his book From Raft to Raft (published 1962). Both books are available in our library.
De Bisschop, an old man by this point, died from injuries received when the raft hit the reef one stormy night. A respectful Protestant funeral was organised by the Rakahangans for the Catholic de Bisschop, with the whole population turning out in their best Sunday whites. The next day a French navy frigate came to retrieve the four surviving crewmembers and to exhume de Bisschop’s body, which was to be returned to France for a hero’s burial.
Interestingly, there is a further Cook Islands connection to this story: Francis Cowan, one of the raft crew and famous Tahitian mariner, was part-Rarotongan; his sister, Patricia Metzker, who lives at Matavera, volunteers every Wednesday at the Cook Islands Library and Museum. 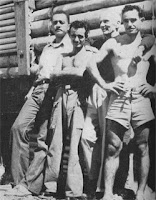 There is a recollection of the raft arriving at Rakahanga one night in November 1958, in a story published by Cook Islands News some years ago, although the authors of that article, Tau Greig & Wayne Meyer, thought that the raft was in fact the Kon Tiki (of Thor Heyerdahl fame).
Eric de Bischop had set out to prove that Heyerdahl’s theory of Polynesian settlement of the Pacific from east to west was incorrect.
De Bisschop, it seems, had also attempted other voyages, which ended in disaster - first in a sampan, which was wrecked on Formosa (Taiwan); he also had a boat wreck on Molokai in Hawaii; he built a twin-hulled canoe, named Kamiloa, which he took to Cannes, through the Cape of Good Hope. Marshall Petain himself welcomed him, upon arrival in 1939. He went to Tahiti on a junk in 1948; after it sunk in the harbour, he got the idea to take a raft to Chile and back. The story of that voyage is told with humour and sadness in the book From Raft to Raft.
Both of these books were of interest to old sea salts like Peter Nelson, a member of the library since its founding in 1964. Nelson was a supercargo on the veteran schooners that plied their trade in French Polynesia and the Cooks in the 1950s and 1960s. Nelson passed away two years ago but not before publishing two novels about life on the sea (which we also have in the library, to be reviewed later).