No change at the top

AGM time at the library and museum and the regular group of members, with a couple of extras, turned out to form a quorum.
One really, really good thing about small committees is that the elections tend to be short and sweet, as was the case here.
The new council is: patron - Dorice Reid Te Tika Mataiapo; president - Gordon Sawtell; vice president - Ian Karika; treasurer - Malcolm Laxton-Blinkhorn; secretary - Luina Lynch; curator - Jean Mason; assistant curator - Garth Henderson; editor - Moana Moeka’a; ordinary members - Wendy Evans, Richard Wachter, Marjorie Crocombe, Gerald McCormack, Myra Patai.
Ian Karika at the moment is on board the new voyaging outrigger canoe, Marumaru Atua, part of a fleet of four on a three month journey from New Zealand to Tahiti, the Cook Islands, Samoa, Tonga, Fiji and back to New Zealand.
Several of our volunteers have either left or will be leaving the island soon so council members might have to get weeding, dusting and painting to keep things ship shape.
The library is applying for funding to get a solar system installed and things are looking promising. It would be a real boon as power is one of our biggest bills each month and if we produce more than we use it gets fed back into the grid and we get a credit!
We continue to add books to the shelves, 124 in April, mostly donations.
Of course, finding somewhere to put them all can be a problem.
The number of readers is increasing too. That’s obviously a good thing and with the national library apparently planning to stop its lending department the number’s likely to grow further. More pressure on our limited space!
We can’t go upwards (foundations aren’t suitable).
Looks like we might need to use TARDIS technology!
No comments:

The New Zealand History online website (www.nzhistory.net.nz) has a section on Pacific islanders in the First World War and in particular a page about the Rarotongan Company.
This was the name given to the Cook Islanders of the second contingent who were attached to the NZEF in Egypt but worked for the British in the campaign against the Ottoman Turks in Sinai and Palestine.
Read about the Rarotongan Company here and see also the photo gallery here.
No comments:

(CILAMS has a number of photographs relating to World War 1 and ANZAC Day in its archives but not as many as we would like). 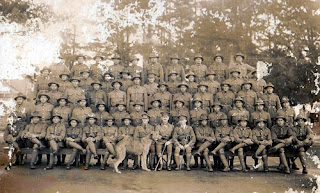 First World War contingent of Cook Islanders at Narrow Neck Camp, Auckland.
Anzac Day, 25 April, marks the anniversary of the first major military action fought by Australian and New Zealand forces during the First World War. The acronym ANZAC stands for Australian and New Zealand Army Corps, whose soldiers were known as Anzacs.
The red poppy worn on ANZAC Day in this part of the world has become a global symbol of war remembrance, although in many countries the poppy is worn around Armistice Day (11 November, marking the end of the First World War).
About 500 Cook Islanders enlisted to serve in the New Zealand armed forces during Word War I. Over 300 of them saw active service, while others died on entering training camps or were returned to Rarotonga as unfit for military service. In all, five contingents left from Rarotonga. (A list of the 313 who saw active service can be found on the
Auckland Museum website here.)

According to Lt-Col J L Sleeman in The War Effort of New Zealand, 1923…
“Possibly of all the loyal responses in the call of Empire from every habitable portion of the globe, the most unique came from Britain’s most distant possessions in the Pacific… First and foremost among these islanders must come the Rarotongans from the Cook Islands, including men from Atiu, Mangaia, Mauke, Aitutaki, Mitiaro, Manihiki, Pukapuka, Penrhyn and Palmerston … better material for conversion into soldiers could not be found”.

In September 1915, the first contingent of 47 Cook Islanders left Rarotonga. After training in New Zealand and a month in Egypt they were sent to the front at the Battle of the Somme. Nineteen-year-old Corporal Apu Tepuretu was killed in action on 30 September 1916 (and is buried in France), his brother Sergeant Araitia Tepuretu, was severely wounded. Corporal Manuel Anthony of Rarotonga and Lance-corporal Solomona of Manihiki died of sickness; at least 8 of those first 47 volunteers died of sickness and Private Vavia William from Mauke died of wounds, bringing the total death rate to 23 percent.
During the Third Battle of Ypres, in October 1917, Private John Tuaine Apa of Aitutaki was awarded the Military Medal.
Sgt George Karika in the NZ Maori Pioneer Battalion was awarded a DCM in Egypt, 1917, for gallantry while in charge of a platoon.
The last two contingents left Rarotonga in June and in October of 1918, but did not see service overseas as the Germans surrendered in November that year.
Unfortunately, there is a dearth of information about other Cook Islands men and women who served in both World Wars as very little has been written about this part of Cook Islands history. 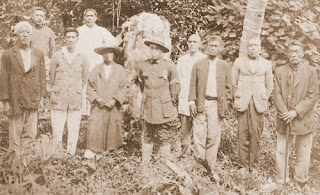 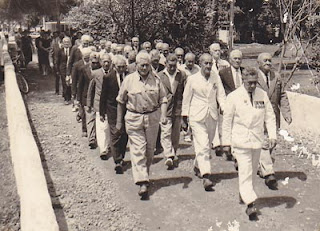 Fly me to the Moon

The story of Apollo
The Apollo programme began on 25 May 1961, when President Kennedy announced that men would be sent to the Moon by the end of the decade. A disaster occurred in 1967 when three astronauts died in the lunar craft while training on the ground. The first practice flight was in 1968 in Apollo 7, and Apollo 8 took its crew of three astronauts round the Moon, without landing. The first landing was made in 1969 by Apollo 11. The following six Apollo flights went according to plan except for Apollo 13, which had vital equipment destroyed in an explosion during the outward journey, and had to return to Earth without landing.

The library and museum building is over forty years old so it’s not surprising that it’s in need of maintenance.
Two years ago, in February 2008, it got a new roof. Now it’s the turn of the iron supporting posts.
In wet weather, rain drips from the roof and down the posts. Some posts have rusted almost completely away near ground level.
The library wants its new roof to remain overhead so Raro Welding boys are on the job replacing the corroded sections. 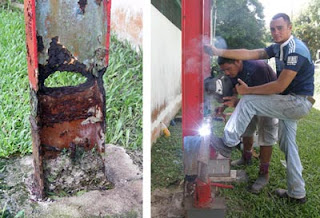 LOOKING BACK
Before 1960 there was neither a library nor a museum in the Cook Islands. (Now there are two of each but that’s another story!)
The CILAMS story began at a public meeting in the early 1960s. The people elected at the meeting had a massive job.
Makea Nui Ariki Teremoana CBE donated land for the venture and the committee started fund raising,
Architect Ken Mills designed the original building (steel frame with concrete block panels; roofing of corrugated galvanised iron; wooden ceiling linings; concrete floor).
It was completed in 1963 and opened in December 1964. The Cook Islands Library and Museum Society now had a place to call home.
During 1974 and 1975 the building expanded with a new 800 sq ft extension to provide archives for the Cook Islands government and private sector.
The library and museum both grew and membership has increased so more space was needed!
In 1999 the existing verandah was closed in to form the new junior library and a smaller verandah added on.
The room at the back of the library that once housed the archives is now used by the University of the South Pacific for art classes.
Rotary funded a lean-to in 2009. It will be used for outdoor events such as sculpture workshops.