"Learning never ends. They add to your personal worth
and what you can do for your community and the world",
(on acceptance of an honorary doctorate in law from Otago
University, New Zealand, in 2004). 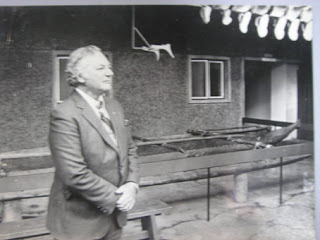 Sir Thomas Davis, KBE, the former CookIslands prime minister and famous traditional Polynesian canoe (vaka) voyager, was patron of the Cook Islands Library and Museum Society at the time of his death. He was serving his second year in what was his second time as patron (the first being in the late 1980s). Sir Thomas Davis died on 23 July 2007 at Rarotonga Hospital after a brief illness.

Papa Tom, as he was known locally, was born on Rarotonga on 11 June 1917.
He was the first CookIslander to graduate from a university and was also the first Cook Islands doctor in 1945. He was also the first Cook Islander to get a novel published internationally - 'Doctor to the Islands', in 1954 - which was reprinted many times in USA, UK, France, Sweden and New Zealand. His autobiography Island Boy was published in 1992. In all, he published 4 books and he authored or co-authored over 25 scientific reports and articles. He was also a regular contribitor, in the 1990s, to the local daily newspaper, Cook Islands News.

In 1952 he entered Harvard University for postgraduate studies and also worked at NASA on the space programmes before returning to the CookIslands to enter politics in 1972.
He was prime minister between 1978 and 1986 and in 1981 he was knighted.

In the 1980s Papa Tom introduced economic reforms that saw the Cook Islands enjoy unprecedented growth, something he ranked amongst his greatest achievements.

Present Patron of the Cook Islands Library and Museum Society, Professor Ron Crocombe, in
his obituary referred to Papa Tom as a classic 'Rennaissance Man' with achievements across a wide spectrum of activities in various countries.

Amongst many things, the late Sir Tom Davis was keenly interested in sailing, designing and building voyaging canoes. A sailor since his youth, Sir Tom began by designing and building three small sailing craft. In 1989-90 he constructed, in his backyard, the vaka Takitumu, which he named after the legendary vaka from the district of the same name on Rarotonga.
In 1993 he sailed Takitumu to Tahiti, Moorea, Huahine, Raiatea, Taha'a, Bora Bora and returned to the CookIslands.

In 1994 he began construction on vaka Teauotonga and sailed her in 1995 to Raiatea, Tahiti, Marquesas, Hawaii, Molokai and Oahu. He sailed Teauotonga to Samoa to the 7th South Pacific Arts Festival in 1996 and then on to Tonga and New Zealand and returned to the Cook islands.

In 2003-05 he built various voyaging canoes in American Samoa
and in New Zealand.

Papa Tom is survived by one of his three sons, Tim Ito Davis, whom he had by his first wife Lydia, a New Zealand actress, and his 5 grandchildren and their children.

"The keel of a boat is its heart. Without that, everything that is a part of it..., cannot sustain itself" (from the definitive book on canoe voyaging, 'Vaka', by Sir Thomas Davis).